LogMeIn Free has officially died. Here's the best alternative to use for free remote PC access.

LogMeIn Free is gone, but don’t panic: You can find alternative remote access tools that cost the same...nothing at all! Whether you need to access a document, collaborate with a colleague, or support several PCs, try this free software to get back into the game.


For ad hoc use, simply run the program and log in from the controlling computer. The two components will connect, and up will pop a window containing the desktop of the computer to be controlled. TeamViewer installs as both a server and a client, so you can use it to take control or to allow control.
TeamViewer 9’s cooler features include the ability to open multiple remote sessions in tabs (as in a browser), cut and paste between computers via the clipboard, and drag and drop files from your desktop to the remote desktop. It’s a mature, stable, practical tool for anyone’s remote-control needs. Note that you’ll get the occasional message about upgrading to the pay version if you use TeamViewer regularly to connect to a lot of different PCs.


*IES is not affiliated with TeamViewer. Free for residential use only. Details at TeamViewer.com.

Posted by iesAdvisors at 1:45 PM No comments:

Newest Amazon patent shows plans to ship your purchase before you even know you'll be buying it.

Amazon has filed a patent called "Method and System For Anticipatory Package Shipping."
The essence is this: Amazon believes it has a good idea which item of clothing, electronics or beauty product you will covet next.

As with so many retailers, it has come to deduce from your buying patterns and other data what sort of person you are. Because we're all, you know, one sort of person or another.

So with this system, it intends to ship those products to the vast warehouse nearest you, in anticipation of your predictable behavior.

There's even a suggestion in the patent that it might be more cost effective to give the customer the product for free, even if they haven't clicked to buy it, rather than ship it back where it came from.

With this system, Amazon is laying down a challenge not merely to other retailers, but to those closest to you.

Source: CNET
Posted by iesAdvisors at 1:32 PM No comments:

It's important for diabetics to monitor their glucose levels, but pricking their fingers to draw blood once, twice or more often each day can literally be a pain. It's also limited in its usefulness, because glucose levels can swing rapidly due to a variety of influences. Google may have come up with a neat solution: contact lenses implanted with tiny sensors.

Google is taking the wearable tech trend to a new level. The company has announced it is working on smart contact lenses that measure the level of glucose in one's body.

Diabetes affects around one in 19 people in the world, many of whom struggle to control the levels of blood sugar in their bodies, Google said. Blood sugar imbalances can lead to issues with eyes, kidneys and hearts.

Most diabetics need to prick their finger and test blood during the day. Many check their glucose levels less often than they should, due to the discomfort and disruption associated with those tests. Given how sharply glucose levels can change when eating, exercising or simply sweating, it would be helpful for diabetics to monitor their blood sugar levels around the clock.

Tears provide a way to measure glucose levels, but they can be difficult to collect. So a team at Google attempted to look at whether miniature electronics - with chips and sensors the size of glitter, and antennae thinner than human hair - could provide a solution.

The firm is now testing a smart contact lens that packs a chip and glucose sensor between two layers of contact lens material in order to measure glucose levels in tears. Prototypes the company currently is experimenting with generate readings once a second.

The team is looking at how the lenses could provide early warnings to wearers, such as through miniature LED lights that indicate when glucose levels are spiking or dropping below certain points.

Although Google has already completed several clinical research studies and has been in contact with the U.S. Food and Drug Administration regarding the project, the technology is still in its infancy, the company said. 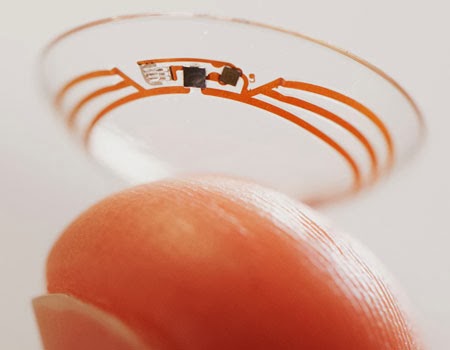 Lipo for kids? There's an app for that!

Want your 9-year-old to learn how to look "slim and beautiful" through plastic surgery? Well, there's an app for that.


It shows kids ages 9 and up how to "suck out fat from an unfortunate girl who has so much weight no diet can help her."


That is until Everyday Sexism, which according to its website exists to catalog sexism experienced by women on a daily basis, got involved.


It asked iTunes and Google Play on Twitter to not only take down the app, but apps like it, and the tweets sparked hundreds of retweets and outrage. Thankfully, since then, the apps have been removed.
Posted by iesAdvisors at 10:40 AM No comments:

Out to a company dinner? 3D printed pasta may just be the perfect topper on the night!

Imagine you're a business owner and went out to eat with all your employees. Now, picture the look on their faces when you all sat down to a meal of pasta shaped like your company's logo. If a collaboration between Italian pasta maker Barilla and Dutch research organization TNO comes to fruition, restaurants could one day have 3D food printers that make this a reality.


According to Dutch news Web site Trouw, the two have been working on a fast 3D food printer that prints pasta and is targeted at the restaurant market. Diners could bring a USB stick containing their 3D designs, and chefs could plug-and-print on the spot.


Project leader Kjeld van Bommel told the Web site, "Suppose you are married for 25 years, you go out to eat and you want to surprise your wife with pasta in the shape of a rose. If you have a design with you on a USB flash drive, the printer can make it."


He told the Web site that the printer in its current form can produce 15 to 20 pieces of pasta in just two minutes; 10 times as fast as it was capable of two years ago. The team is currently working on increasing that speed to a workable restaurant level.


According to The Guardian, van Bommel, said the project was only in preliminary stages and refused to make any further comment. Given that the first kitchen-ready 3D food printer is due to hit the consumer market later this year, though, we can't imagine others will be terribly far behind. And pasta, made of malleable dough, seems a particularly appropriate material.


Source: Trouw
Posted by iesAdvisors at 11:05 AM No comments:

A new feature from Google will let you e-mail just about anyone with a Google+ account, and, in turn, give them the ability to e-mail you.


The feature, announced on the official Gmail blog, won't give your actual e-mail address to strangers. But when a Gmail user begins typing in the address box, it will provide suggestions including people in their Google+ network.

The idea, Google says, is to make it easier to contact friends and other contacts when you've forgotten, or never had, their e-mail address. But some early reactions suggested the new change may make it too easy.

In our opinion, it's just another reason to hate Google+. They have officially turned it into a stalking tool.

Google, clearly anticipating the privacy concerns, notes that users may limit the feature, or opt out of it entirely.

While the default G+ setting will allow anyone on Google+ to contact you, users may limit that access to people in their Circles on the network, or to nobody at all.

There are other limits, too. A user may only e-mail you using the system once if you don't reply (addressing the stalking concerns, perhaps). And messages from people who are not in your G+ Circles will go into the "Social" folder, along with other posts from sites like G+, Facebook and Twitter, instead of the user's primary inbox.

Google said the feature will be rolling out to Gmail and Google+ users over the next couple of days, when they will receive a message with a link to the feature.

Own a Ford with Sync technology? Now you can order a pizza hands free!

Ford’s relentless push to add as many apps to its Sync portfolio has finally peaked. With pizza. Because everyone should be able to order a pie without taking their hands off the wheel.

Anyone with Ford’s ubiquitous Sync AppLink system in their dashboard and a Domino’s app on their phone can, through their Domino’s “Pizza Profile,” place an order with a few voice commands and pick up a steaming, cardboard-crust pie on the way home. The “Pizza Profile” stores your payment info and details on your favorite pie, so you aren’t repeating “large Brookyln-style with pepperoni, bacon and pineapple” over and over, trying to get Sync to recognize the command.

“This is, no question, one of the coolest in a long list of recent technology innovations for Domino’s,” Patrick Doyle, the pizza chain’s president and CEO, said with complete earnestness.

AppLink allows drivers to connect to supported apps using voice commands, and with dozens of apps optimized for Ford’s Sync system, it’s one of the most dominant players in the market.


Source: Wired
Posted by iesAdvisors at 3:35 PM No comments: